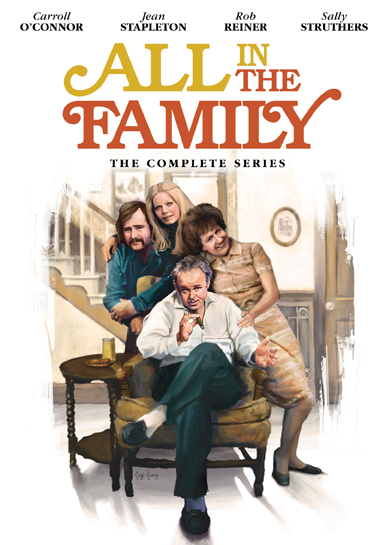 All 208 Original Episodes * Includes The Three-Part Retrospective From 1979

Few television shows have left as substantial and enduring a footprint on American popular culture as Norman Lear’s masterpiece All In The Family. This groundbreaking comedy series looked at the state of the world through the eyes of an argumentative but loving family and gave us some of the most fully dimensional characters in television history. The jokes had a million targets, aiming at race, politics, sex and human foibles, but the humor was firmly rooted in the characters of Archie, Edith, Mike and Gloria.

This complete series set is a long-overdue celebration of the enormously influential program and offers fans a collection to treasure for years to come.

“As the Shout! Factory releases a boxed set this week containing all nine seasons of the series along with some tasty extras, it is clearer than ever what a singular phenomenon 'All in the Family' was. Sure, it was a funny show with a fabulous cast, but we can now see that it may also have been a high-water mark for television in terms of how much impact a single series can have in shaping American culture.” – The New York Times

“I'd give All in the Family: The Complete Series our highest award here at DVDTalk: the DVD Talk Collector Series award. On content alone, it's the best TV release of 2012.” – DVD Talk

“This nicely compact set has everything you'd want, including all 208 episodes solidly remastered, retrospectives, pilots for the direct spin-offs and more. It's a landmark series in every way.” – Huffington Post

“Normal Lear's iconic sitcom – still widely and correctly viewed as one of the greatest series of all time – gets the long-awaited Complete Series DVD treatment courtesy of Shout! Factory.” – Television Without Pity