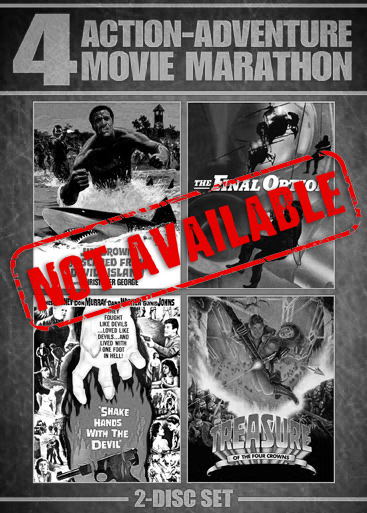 4x the action, 4x the excitement!

Sentenced to life in the world’s most notorious prison colony, two inmates enact the ultimate jail break…but find that life on the outside can be every bit as deadly. Football superstar Jim Brown and drive-in movie mainstay Christopher George star in this gritty actioner from the legendary Roger Corman.

An elite Special Air Service captain takes the ultimate risk when he infiltrates a terrorist organization in order to thwart a plan to take several dignitaries hostage. Inspired by the real-life operations of counter-terrorist forces, this military movie favorite finally makes its explosive debut on DVD in North America.

All-time Hollywood favorite James Cagney stars in a gripping tale of the struggle between the Irish Republican Army and the British Black and Tans. When an Irish-American medical student (Don Murray) loses his best friend to violence, he abandons his apolitical stance and takes up arms with the rebellion…but he is soon tempted by a comely British hostage.

When a set of mystical artifacts falls into the hands of a diabolical cult leader with plans for world domination, it’s up to devil-may-care mercenary J.T. Striker to reclaim them. Assembling a ragtag team of adventurers, Striker sets out on a mission where the stakes may be nothing less than the balance between good and evil.

TREASURE OF THE FOUR CROWNS