There aren’t many movies specifically about Thanksgiving, yet many of us have three or four days to kill every November that are often spent binge-watching anything that puts us in the holiday mood. And while there are lists featuring movies that take place on or around Thanksgiving, we have yet to see a definitive compilation of the best things to watch this time of year. Naturally, we decided to take that awesome responsibility upon ourselves and present to you the ultimate Offbeat Thanksgiving Playlist!

It’s been a Thanksgiving tradition to watch Mystery Science Theater 3000episodes since the first Turkey Day Marathon in 1991, so for many fans the cult TV show is synonymous with the holiday of feasting. But even if you didn’t turn on Comedy Central to watch Joel, Mike, Tom Servo and Crow riff on bad movies every year, any time is a good time to start including some MST3K in your annual traditions. There are many great episodes to choose from, but more hardcore MSTies choose Mitchell than any other this time of year.

If marathoning MST3K is essential to your body’s ability to process tryptophan, be sure to tune in for the online live stream Turkey Day Marathon that we’re airing on Thanksgiving at www.mst3kturkeyday.com!

Maybe you don’t have time to commit to a full-length film and would rather just watch some YouTube-worthy video clips. Look no further than the (very R-rated and very NSFW) fake trailer for Thanksgiving from Grindhouse. Directed by Eli Roth, the trailer teases a slasher movie featuring a killer dressed as a pilgrim. The faux preview is so good we almost wish it was a real film — although killing people who are asleep on the couch during a post-meal Thanksgiving nap might not make for very exciting cinema.

Food is the theme of the day, and food is the theme of this excellent animated feature. The story of a rat with impeccable tastes and surprising culinary skills has plenty of kid-friendly fun, but the fine folks at Pixar make sure their movies’ appeal won’t drop off with the audience’s age. Adults will find plenty to love in this thoughtful, beautifully animated film that will probably be the only time in your life when seeing a rat near food causes you to say “Awwww” instead of“Holy $#&% someone call the exterminator!”

As you may have noticed in my post of 15 Perfect Halloween Movies & TV Shows, I am a little bit fascinated by the animated world of Charlie Brown. The Thanksgiving special is no exception — while it may not be quite the holiday classic that the Christmas and Halloween specials have come to be, it has all the elements that make these cartoons so bizarrely great. Most notably: all the Peanuts kids are celebrating Thanksgiving together in a world where adults are creepily absent and elementary schoolers are responsible for the whole event.

If you’re trying to impress your Thanksgiving guests with how cultured you are, pop this Academy Award-winning Danish film into your DVD player. It’s all about the healing power of great food, the bonds that form when sharing a meal, the preparation of the feast of a lifetime and oh my God give me turkey to eat right now.

What’s food without drink? Enjoy the appreciation of fine wine with the misadventures of Miles and Jack in California’s wine country, complete with car crashes, golf course assaults and a healthy serving of uncomfortably embarrassing moments. I’ll drink to that!

Despite the fact that Christmas decorations go up in malls in October and holiday music starts playing on the radio in early November, in many ways Thanksgiving kicks off the end-of-year holiday season. The next day is Black Friday, when everyone stampedes the stores and buys a whole bunch of stuff to give as gifts to others in December, and then it’s head-first into Hanukkah-Christmas-Kwanzaa-New-Year’s-etc time. So while that should be reason enough to watch a Christmas movie on Thanksgiving weekend, I’d like to point out that Miracle on 34th Street actually starts on Thanksgiving. Now you totally can’t argue with this recommendation!

The nonstop snowy scenery in this movie will want you to keep the fire roaring, but it’s also the cure for the overdose of sentimentality that we all get this time of year: it’s about curmudgeons insulting each other and fighting over a woman. Oh, and it takes place at Thanksgiving! What’s not to like? 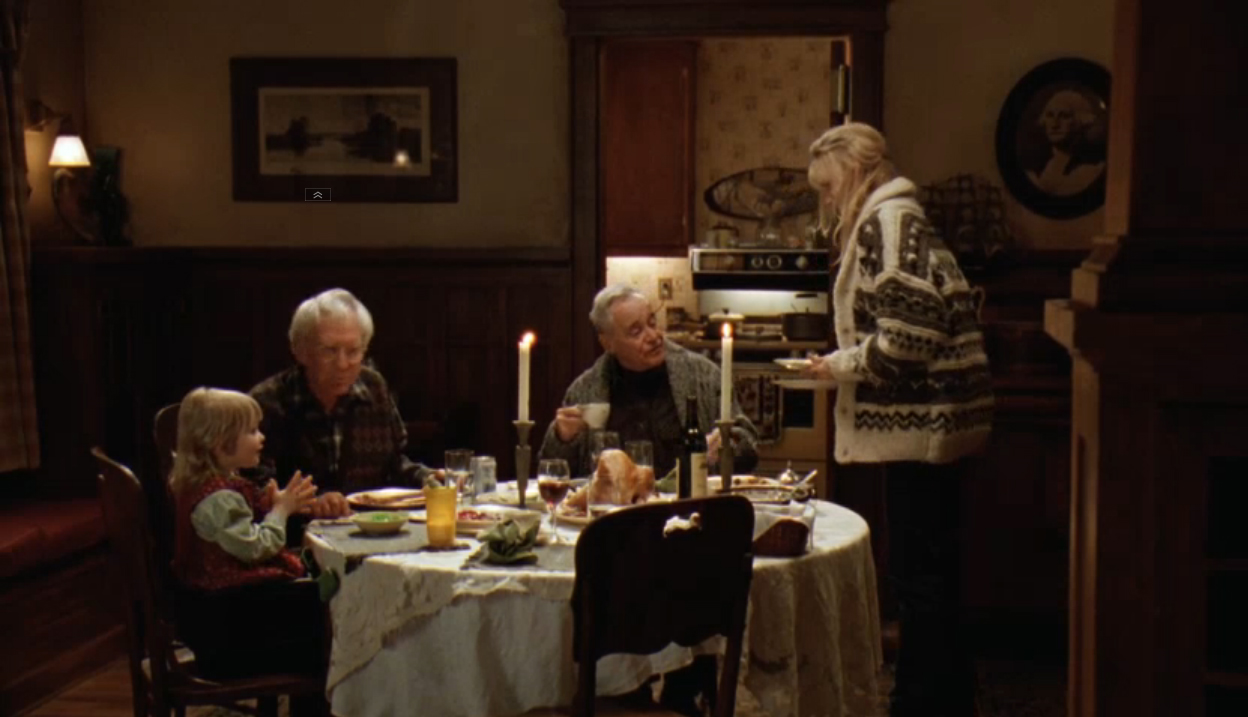 “Why would you recommend a quirky British comedy from 1983 that explores the various stages and big questions of life in a series of hilarious sketches as something I should watch while stuffing my face with turkey on Thanksgiving?” is a thing you might reasonably be asking me right now.

I present the obvious answer to you in this scene. Further commentary is unnecessary.

You’re probably not eating raw fish for Thanksgiving, but it’s fascinating to watch someone who literally thinks of nothing all day except how to prepare the best possible food he can make (and judging by the month-long wait and $300 price tag for his restaurant, he’s doing something right). Maybe it will inspire you to think really, super-hard about whether or not to put marshmallows on your sweet potatoes. Or maybe you’ll still be serving cranberry sauce in the shape of a can this year. Totally nothing wrong with that, by the way.

If you have any level of guilt from eating turkey meat, let this low-budget masterpiece of so-bad-it’s-good filmmaking be your penance. It’s not really about turkeys exacting their revenge on humans, but it’s close enough. Birdemicis like Alfred Hitchcock’s The Birds but with extremely high-end special effects. See for yourself in the trailer!

WKRP In Cincinnati: Turkeys Away

It’s a movie about a giant bird! Get it?! True, they don’t cook and eat said bird (though there is a turkey truck involved), but the comparison to Thanksgiving still totally works. Plus, you get to see some favorite Sesame Street characters like Kermit the Frog and Snuffleupagus, cameos from John Candy (the star of another movie on this list) and Waylon Jennings, and if you think this one’s just for kids, think again — Follow That Bird actually winds up getting rather dark (kidnapped Big Bird, anyone?). Hooray for Thanksgiving!

Now this is a Thanksgiving movie. Sort of. I mean, the whole goal is for them to get home for Thanksgiving, so not much of the film actually takes place onthe holiday itself. But who cares when the results are this funny? With a hilarious script that’s only made funnier by the formidable comedic talents of two legends (Steve Martin and John Candy), for many people, Planes Trains and Automobiles has become the de facto ultimate Thanksgiving movie.

Did we include your favorites? Let us know in the comments!