We live in an increasingly digital world, but many of us still love buying physical media for various reasons. While millions of movies and TV shows are being streamed to living rooms across the world, we wanted to know why you keep coming back to Blu-rays and DVDs. So we posed the question to our Facebook followers and got nearly 250 comments from passionate fans. After carefully reading through all the comments (OK, there were two that we totally skipped), we compiled a list of the 5 reasons you still love Blu-rays and DVDs!

1. The Comfort of Ownership

By far the most important thing for you the fan is the feeling of ownership that comes along with buying a Blu-ray (bonus points if you answered in the form of a rhyme like Joe S did). Online streaming licenses have expiration dates. Hard drives fail. But those trusty plastic discs are always hanging out in your living room to comfort you, reminding you that this movie or TV show really is yoursto keep and re-watch endlessly. In fact, thanks to the first-sale doctrine, you can do pretty much anything you want with it endlessly. You’ll never have to worry about when a movie might disappear from your favorite streaming service when you can hold it in your hand.

Digital downloads can certainly be convenient, but nothing can replace the feeling of holding a movie or show you’ve sought for years and has finally been released and bought with your own money. It’s tangible, it’s real, and it’s MINE! —J.R. L

We also couldn’t help but sense a deep distrust for streaming services in your responses. It would appear the cloud makes most of you feel about as warm and fuzzy as the NSA.

What if cloud services pull the plug? You lose your movie. — Steven V

We’re not entirely sure why we got that impression… 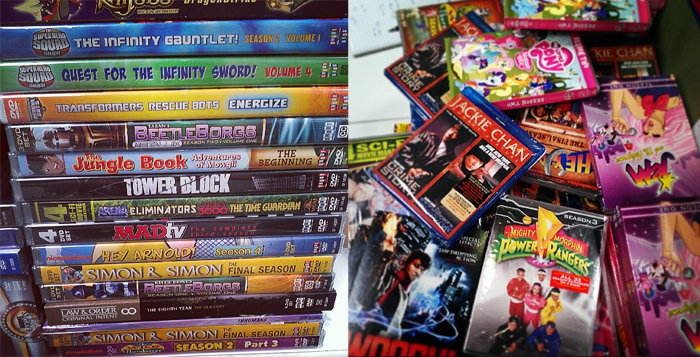 2. Having a Library Of Awesome

I like to be able to see all my DVDs in one place, like a library of awesome. —Steven B

Many Shout! Factory fans are collectors. In fact, we saw quite a few of your impressive collections last year during our Show Us Your Collection Contest. Some of them were so big, you needed entire rooms dedicated just to storing your collectibles!

I think you can tell a lot about someone if you walk into their house and see what they have in their DVD/Blu-ray collection. If someone doesn’t have ANY collection…. GET THE @#$% OUT OF THEIR HOUSE!!! — Sam M

But there’s one very key feature to having a collection: you have to, like, havesomething in order to collect it. And therein lies the problem with digital downloads for many film fans: you can’t put all those ones and zeroes on a shelf to display. Sure, you may earn digital badges to decorate your virtual home, but with Blu-rays and DVDs you can pick it up with your hand and show it off proudly on a shelf in your actual home. You can browse the artwork like your own personal Blockbuster (hey, remember those?) and visually take in the fruits of your labor. Having a collection goes hand-in-hand with that feeling of ownership, but it takes it one step farther — you don’t just own a Blu-ray, youflaunt it.

There’s just something about being able to hold in your hand a film, or a box set of a series. It’s special because I own it. I COLLECT it. — Greg A

There’s always going to be people who prefer to be surrounded by their libraries – seeing the shelves lined, alphabetized, the colors and typography and art on the spines… all of it. To sit in a room surrounded by it all – that’s what I’m talkin’ ’bout. — Llewellyn B

Because they are like my family!! ALL are welcome!!! — Steve P

Most important is the resolution of Blu-ray versions as compared to digital downloads. — Russell G

Let’s face it: a collector is only a collector because he or she likes items of quality. And if Blu-rays didn’t give you the best of the best quality in video and audio, you wouldn’t be nearly as eager to stockpile them in your TV room.

But they do. And often they’re remastered, new transfers of your favorite classic films. That means not even the best Internet streams can compete with them. So for the discerning cinephile, quality is a top priority and a big reason for collecting.

The picture quality and sound quality are so much better with Blu-rays. Most streams are less than HD-quality (maybe 720p with 2.0 audio) and you are at the whims of your Internet provider who may throttle your connection. — Max R

I love the “completeness” of the physical disc, cover art, liner notes & bonus features — Lee B

Everyone loves a good movie, but what’s even better than your favorite flick? Finding out every possible detail about how and why your favorite flick was made, of course! Everyone likes getting something new, so when you buy a DVD that has new artwork, in-depth liner notes, uncut footage, commentaries from the filmmakers, interviews with the actors and all sorts of other goodies, it feels like you’re seeing it for the first time all over again.

Maybe that’s a little too cliché. But it is pretty great to see/hear something new about a movie you’ve loved for ages.

As much as I love seeing a film get a great new transfer, it’s exploring the making of the film that I adore afterwards. Many of these movies were made during a time when bonus material wasn’t important or considered, so when stuff is unearthed for new generations to see and get a respect for the hard work that went into the making of our favorites, it’s just unequaled. — Jase M

It’s the special features that lend insight into how the film was made (which I care about a lot) and help contextualize the movie from a historical perspective.— Marc P

Hang on Geoff…We’re not sure you understood the question. 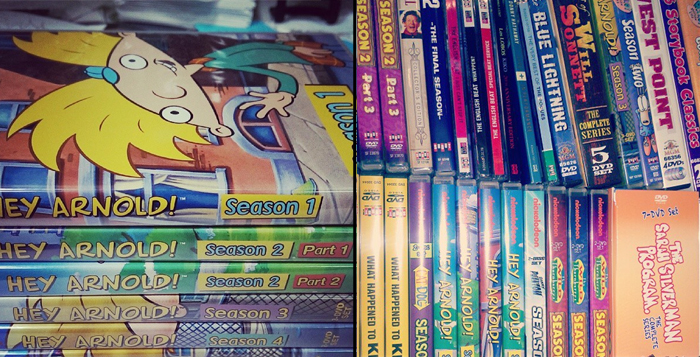 Our personal favorite thing in the world is when a streaming movie starts buffering just as it’s getting to the best part, then returns in choppy chunks with low-res video and fuzzy audio until the Internet connection catches up.

Sorry, did we say favorite? We meant that’s the worst thing that’s ever been invented (we’re including the pet rock in that generalization, so it must be pretty bad). Seriously, buffering is the worst, and when you’re at the mercy of a less-than-stellar cable modem connection, trying to watch a film can be so annoying, it makes you want to turn off the TV, play solitaire and read for a few hours instead.

Nah, we’re only kidding. Who would bother reading and getting all intellectual when you can pop in a Blu-ray of your favorite slasher flick? The answer is nobody, because we’re pretty sure there are no Dickens novels that feature a chainsaw-wielding psychopath murdering people.

Thanks to everyone who responded on our Facebook page! Here are a few more of our favorite quotes to finish it off:

Personally, it’s a lot like owning a physical trophy from bygone era. Owning a VHS, DVD or Blu-ray is something you can look upon with fondness and nostalgia, accompany that with the bonus features and you can gain a more intimate glimpse of what went into the film project, the trials the cast and crew had to go through just to bring their dream to life. It’s a historical time capsule, a dream made flesh, a sketchbook given moving parts and aural fragments. In short: owning a film in a physical format is a treasure that can be shared with all, and that is a great legacy indeed. — Andrew B

So much effort goes into filmmaking. Every movie you love deserves to be represented by a small space on your shelf adorned with artwork. Keeping your movies exclusively as files on your computer is like displaying the Mona Lisa in a basement and only going down there when you want to look at it. — Chris D

When I die, they’ll be able to open up my movie cabinets and say “THIS is WHO he was.” …Scary as that may be. — Scott M.

Some people collect stamps, some coins. I collect movies – artwork, extras all obtain value years later when you take your movie out of your collection and admire its beauty and think upon the great memories you had watching it. —Brian R

For me, physical media (when it comes to films), is the only way. — Aviva S